With its numerous historic half-timbered houses, Quedlinburg inspires visitors and tourists from all over the world.

Visiting Quedlinburg is like traveling back in time through centuries. The city is also known as the birthplace of Germany, because Heinrich I lived and ruled here from 919 to 936. The king united Germany and paved the way for Otto I. With the emperor Otto I also began the Ottonian era.

1 million visitors make a pilgrimage to Quedlinburg each year and experience a very special journey back to the Middle Ages.

The main attractions and well-known sights are the St. Servatius Church and the castle.

The historic center of Quedlinburg has been a UNESCO World Heritage Site since 1994.

Best sights in Quedlinburg | Things to do on map 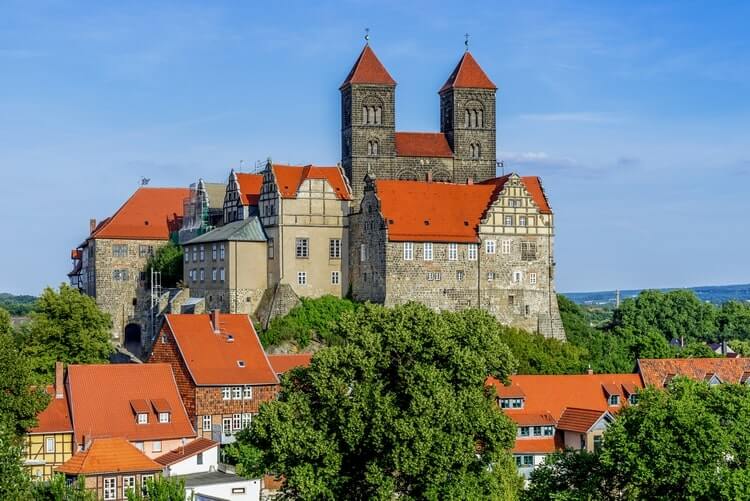 On the Castle Hill are the almost 1000 year old St. Servatius Church, the three-wing Renaissance Castle with its castle museum, the former home of the church women and a beautiful garden.

This complex is considered the landmark of Quedlinburg and is a famous sight of the city.

Even before the city existed, the German emperors and kings resided here in the 10th century. 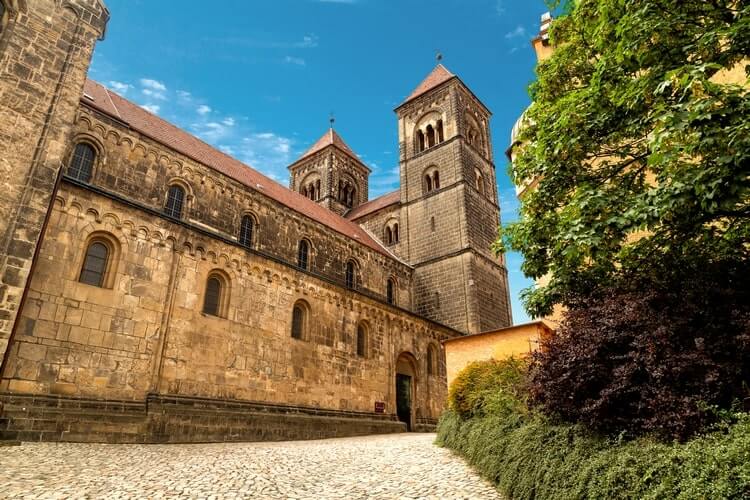 The St. Servatius Church on the Castle Hill with its prominent towers is one of the most important churches of Romanesque architecture in Germany.

The main portal is the oldest columned doorway in Germany. The door handle is half pig and half dog. In Germany there is a saying “seinen inneren Schweinhund überwinden”. Schweinehund is a mystical creature, which is half pig and half dog and is a metaphor for laziness. And the saying means to overcome one owns laziness, in this case enter the church.

The oldest part of the church is the crypt. 936 Heinrich I and later his wife Mathilde were buried here. The remains of the king have been missing since the Middle Ages.

In the crypt are recurring motifs of Romanesque stonemasonry, especially snake and knot ornaments.

The cathedral treasure is one of the few medieval church treasures that are still in its original location. With 50 objects, the treasure is relatively small, but the pieces are very old and precious.

Some parts were lost during the war, but the collection is complete again since 1993. 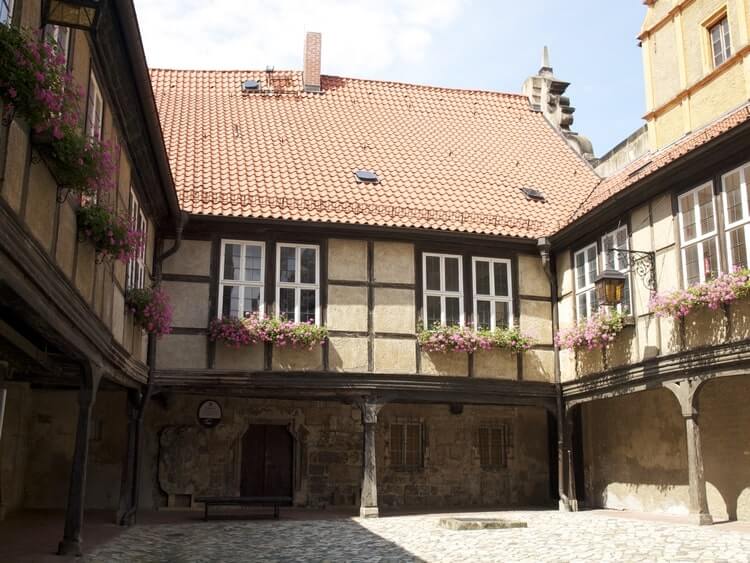 The Castle Museum with its exhibition on the city's history is located directly opposite the St. Servatius Church in the Renaissance Castle.

A castle guide escorts the guests through the state rooms of the castle.

An attraction of the castle is the so-called Raubgrafenkasten (translated: predatory count box).

This is a portable prison cell, the only one of its kind in Germany.

Enemies and prisoners of noble origin were held here in the Middle Ages.

The Ottonian cellar vault is in the castle below. In the GDR era, it was a location for a night bar. 1000 years ago the wine cellar or a family crypt was located here.

The column rooms are among the oldest on the Quedlinburg Castle Hill. One can only speculate about their actual use. It is believed that the former residence of the empresses in the 10th century was located above this building foundation.

The exhibition provides information about the early German emperors, especially Otto I.

Other rulers of the Ottonian family succeeded him in the throne.

At that time, Quedlinburg was one of the most important centers of power. 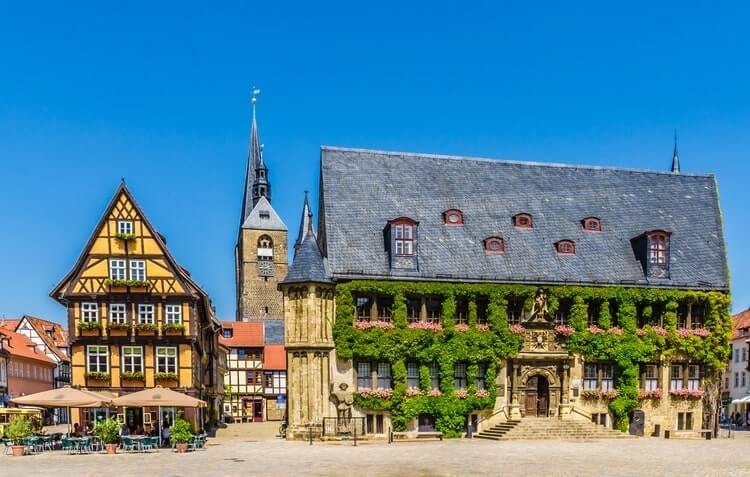 The market square is the center of the historic town.

Right at the corner of the town hall stands the Roland, a 2.75 Meter high statue.  It can be traced back to the year 1460 and it stands for the independene of the citizens of Quedlinburg.

The market square is surrounded by numerous colourful half-timbered houses from the 16th to 18th centuries.

The town hall on the market square is the center of Quedlinburg's old town and dates from the 14th century. It got its current appearance after a renovation in the 17th century. 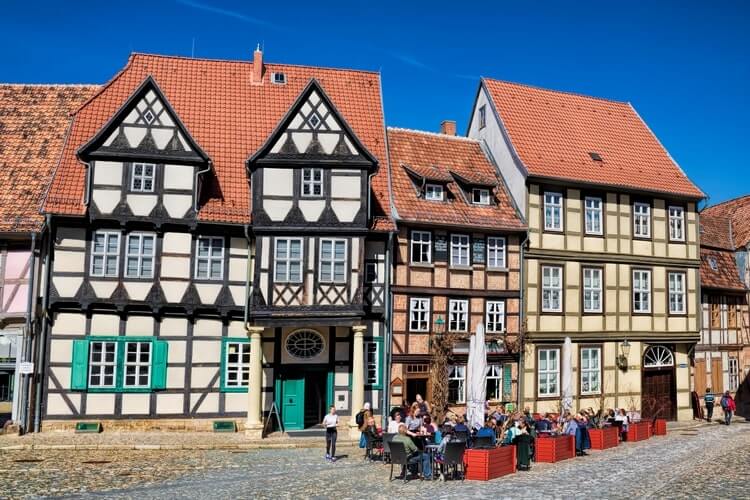 The old town covers almost 90 hectares and is one of the largest in Germany. There is no place with so any half-timbered houses.

The many half-timbered houses give the city its unique flair, because each one seems to tell its own story. A good 2000 of these houses from all eras and styles are here.

The Klopstockhaus (picture), the birthplace of the poet Friedrich Gottlieb Klopstock, is a famous one.

Along the pedestrian zones, an inconspicuous narrow and dark corridor leads into one of the most romantic alleys in the old town.

Many shoemakers in the city used to live here in the “Schuhhof” and offered their goods. 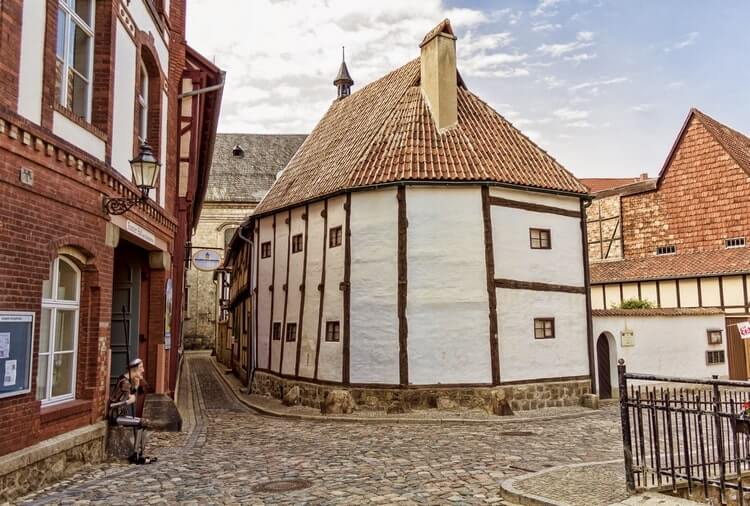 The oldest house in the old town dates from 1347. Here you can see the special construction of the Middle Ages with a stone base, the surrounding swell ring and the 6-meter-high, cross-floor stands.

The stand construction is typical of the Middle Ages. Later in the Renaissance, the facades of the houses were built more splendidly and also more stable. 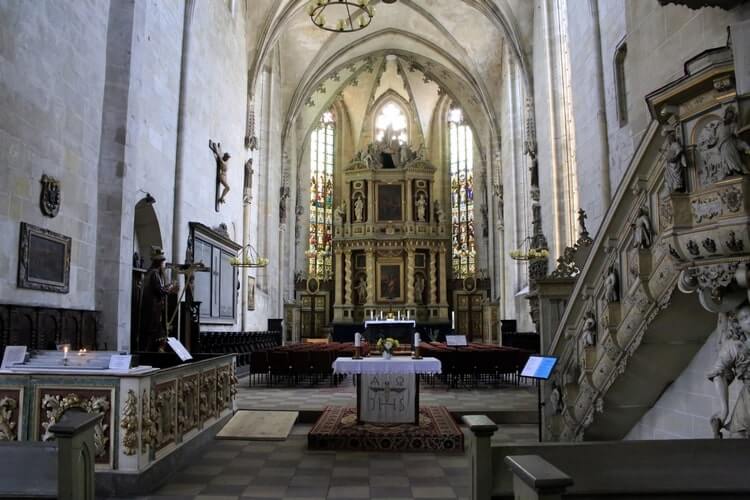 In the old town you will pass the Blasiikirche, the oldest parts of which date from the 10th century.

Today, various cultural events take place in the church, such as exhibitions, concerts and theater performances. 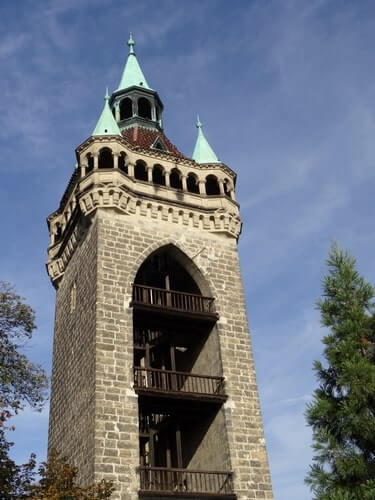 The Lindenbein Tower is part of the old city fortifications and is the highest observation tower in the city at 42 meters.

As a medieval city, Quedlinburg was surrounded by a city wall and numerous towers. The first city wall was built around 1150. So-called battlements led from tower to tower. 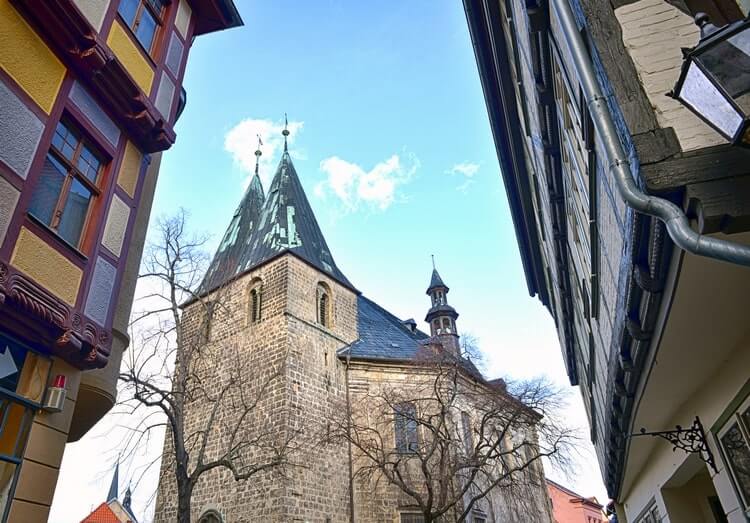 The parish church of the new town in Quedlinburg is the St. Nikolai church (Nikolaikirche). Surrounded by centuries-old half-timbered houses, the church rises with its 72 meter high towers.

Originally the church was built around 1222 by the citizens as a Romanesque basilica.

According to legend, a shepherd donated both towers after finding a treasure.

The bell tower can be climbed. 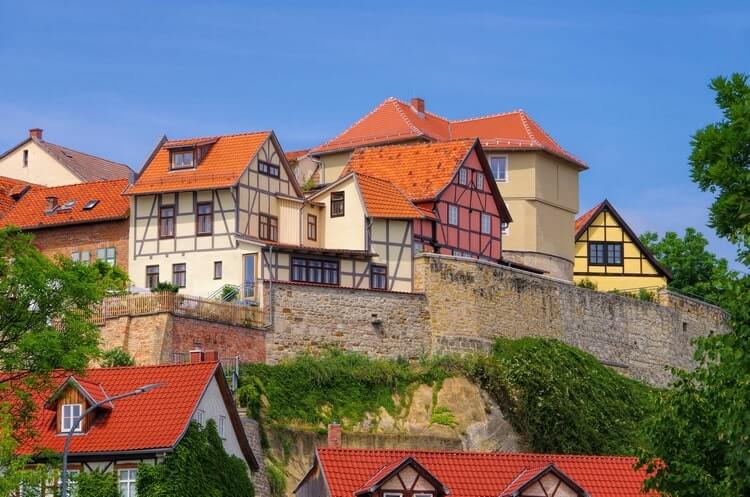 The streets on top of the Munzenberg (can be translated to “Mountain of coins”) are even narrower and the houses even smaller than those in the old town below. In the past, beggars and street musicians lived here who were not tolerated within the city walls. There used to be a monastery here, but today only the kitchen remains. The striking chimney of the monastery kitchen is a symbol of the Münzberg.

A climb up here is worth it for its numerous small half-timbered houses and the good view on the castle hill (Schlossberg) of Quedlinburg.

Traveltip: The sights of Dresden are historically and visually appealing. A trip to the city on the Elbe is definitely worthwhile on a city trip.

The modern-style gallery houses the largest graphic collection by the German-American artist. Although Feininger was never in Quedlinburg himself, he had a friend from the city, the artist Herman Klumpp.

During the Nazi era, Klumpp took some of his artist friend's works to Quedlinburg to protect them from the then regime and early GDR times. 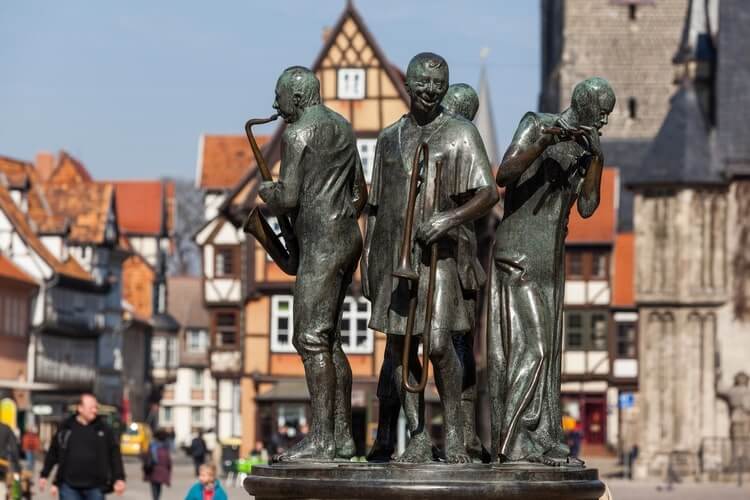 These include the "Munzenberger Musicians ", the monument to Johann Christoph Friedrich GutsMuth, the goddess Flora, the fountain of shadow, the coronation of Henry the First and the bust of Friedrich Gottlieb Klopstock.