Castles near Cologne Germany | Most beautiful around

Cologne not only offers many important sights in the city, but also has a lot of culture and history to offer in the surrounding area.

Here we show you the most beautiful castles and palace complexes around Cologne that you should definitely take a look at.

Burg Satzvey is a very well-preserved moated castle in the Rhineland and is mainly used by its owner for numerous events.

In addition to the events, you can move around on the spacious grounds and enjoy the splendor of this moated castle.

The “Castle Christmas” is the medieval Christmas market at Satzvey Castle, which has been held here for over 30 years. 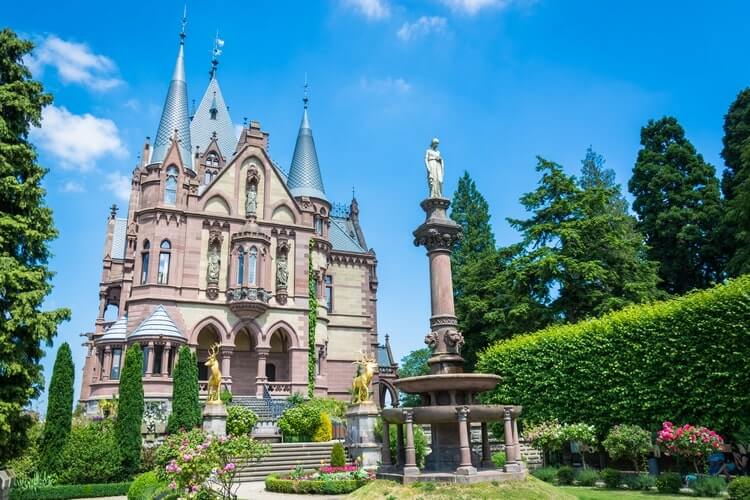 Drachenburg Castle is located directly on the Rhine and is a true icon of the Rhine romanticism. This unusual building near Königswinter near Bonn was built from 1882 to 1884. The Drachenburg was one of the most important buildings in Germany at the end of the 19th century.

You can expect a mix of culture, a memorable natural landscape and a wonderful view of the Rhine and the surrounding area.

Schloss Drachenburg has been attracting visitors from all over the world with its exceptional castle architecture and unique location since the 20th century. 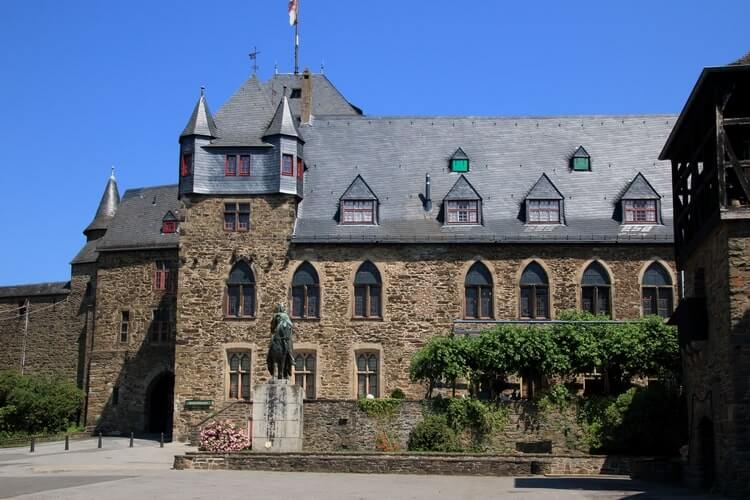 Since the 12th century it was the ancestral castle of the dukes of Berg. Over time, Schloss Burg became more important and deteriorated into a ruin. It was built between 1890 and 1914.

When you visit you get a modern way of telling stories with the "AR Schloss Burg App". The history of the castle is brought closer using augmented reality on a tablet. Count Adolf V. will guide you through the museum. 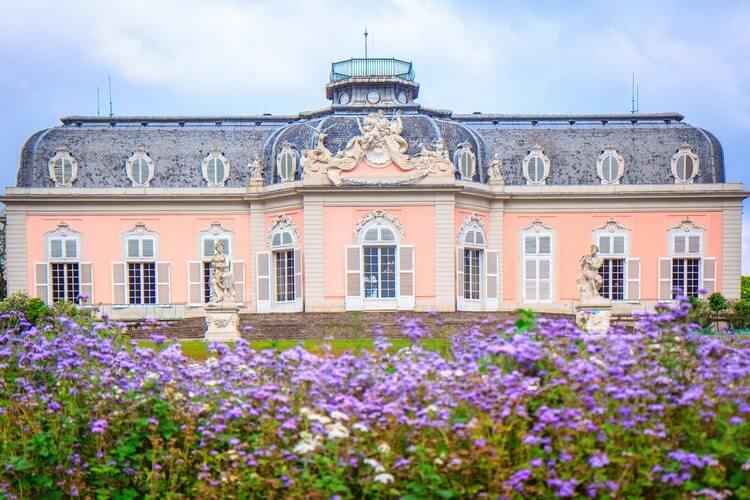 Benrath Palace (Schloss Benrath) in the style of French rococo is definitely worth a visit, along with its beautiful parks.

The castle in neighboring Düsseldorf is also worth a visit when visiting Cologne.

Built between 1755 and 1733 by Karl Theodor von der Pfalz, it now serves as a cultural center with three museums.

The park also offers the opportunity to relax on its large grounds. 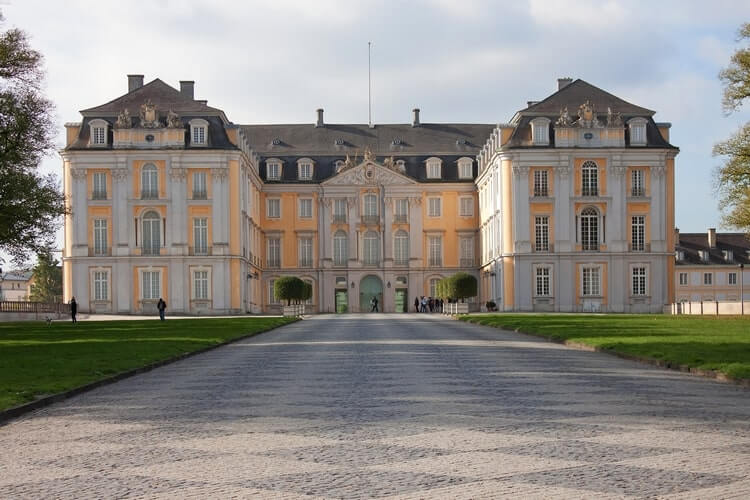 The favorite residence of the Cologne elector and archbishop Clemens August, Schloss Augustusburg Brühl, is one of the first Rococo-style buildings in Germany.

The order of the elector began in 1725 to build the castle on the ruins of a medieval moated castle.

Until its completion in 1768, well-known artists of European reputation worked here.

Most Germans should be familiar with Balthasar Neumann, because the master's face could still be seen on the last valid 50 D-mark note until the euro was introduced. He made the design for the magnificent staircase.

Together with Falkenlust Castle and the Castle Park, Augustusburg Castle has been a UNESCO World Heritage Site since 1984. 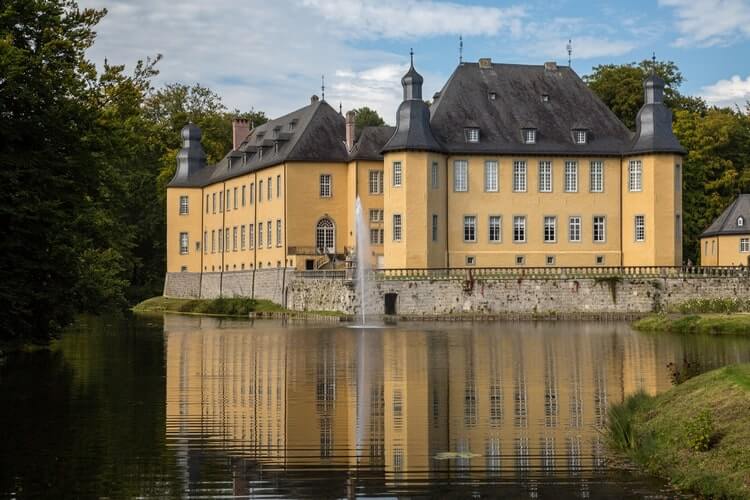 Schloss Dyck is a baroque pearl surrounded by greenery. The property with almost 1000 years of history has been completely preserved with its complete palace complex. History buffs as well as culture and nature lovers get their money's worth here.

For many visitors, the facility with its many different gardens and the historical park is an absolute highlight.

The picturesque backdrop of Dyck Castle is also the setting for the Classic Days in the extensive park complexes. Vehicles with racing history embark on a 2.8 km long circuit. 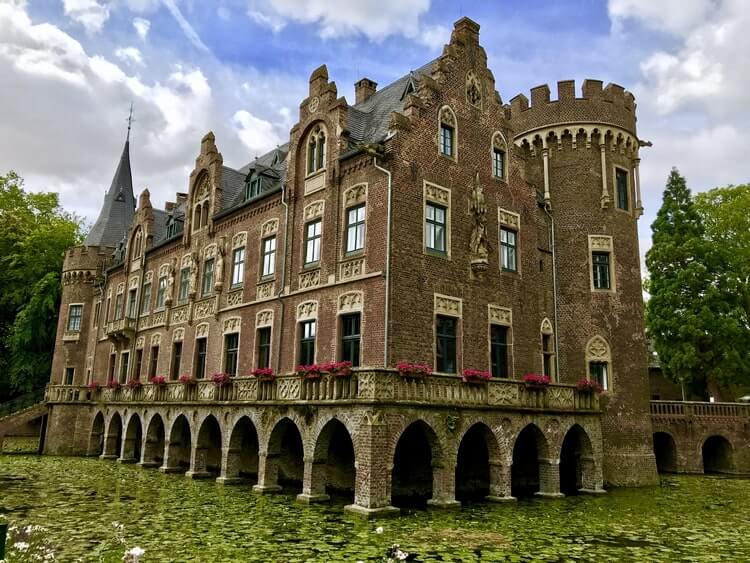 Paffendorf Castle was built around 1600 in the Renaissance style. Between 1861 and 1865 the castle received its turrets, balustrades and balconies during a renovation in the neo-Gothic style.

The complex includes the almost 8 hectare castle park, which is ideal for long walks in nature.

The inner courtyard of the castle offers space for events. In the summer months, numerous artists use the stage for performances.

The castle restaurant will take care of you, from a small snack to a menu.

It has been one of RWE Power's information centers since 1976. 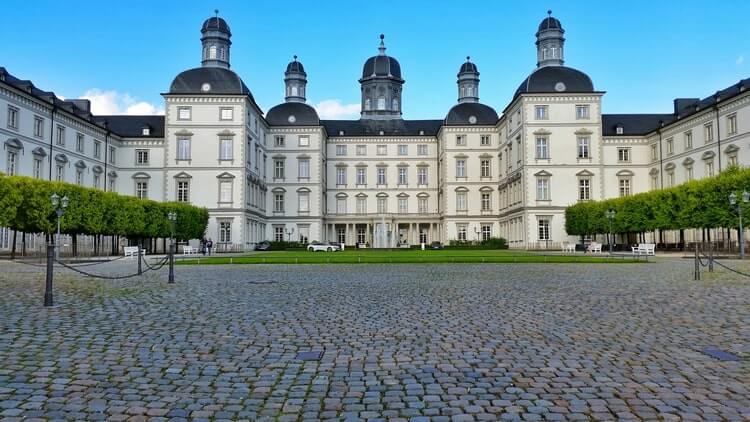 Bensberg Castle was built as a hunting lodge by Duke Johann Wilhelm II in the early 18th century. The baroque building complex was completed in 1711, with the central axis oriented towards the Cologne Cathedral. Goethe was impressed by the view when he visited the palace in 1774.

After extensive renovation in 1997, the former hunting lodge became a five-star hotel. It is now one of the leading hotels in Germany and houses the renowned Vendôme restaurant. 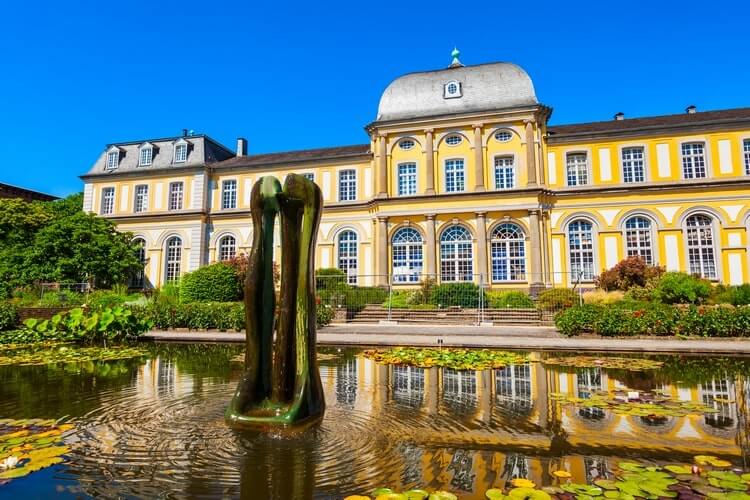 Cologne is close to the former capital Bonn and there is the Poppelsdorfer Schloss. It is the former summer residence of Elector Clemens August I and, together with his park, is the site of the university.

This also includes the Botanical Garden of the University of Bonn with over 11,000 plant species.